I had a look at Orii Kaz's interesting and cool art exhibit in Gallery La Mer in the Okano Building on Tuesday, and after looking at the art for a bit, we went out and explored the Okuno Building a little.  More on that in a second, but first, here's his promotional postcard for the event: 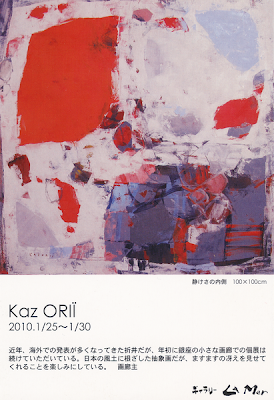 I liked all of his stuff, including the image used for the postcard, but there was one image I particularly liked, and since it had a red dot for "Sold" below it, apparently someone else agreed.  Later when we went out building exploring, I asked him if he had some concept in mind for his batch of art.  He said "Concept..." and looked off into space thinking, and suddenly I realized that good art is good art and "concepts" are often for gimmicky sub-art that needs some sophistic reason to exist.  Good art should look good of its own accord without needing a gimmick to prop it up.  Well - whatever!  In any case, Kaz's art just looks good - concept or no concept!

Toriyama Akira has (until January 30th) an interesting three-part exhibition utilizing all three exhibition spaces of Gallery Kobo (巷房) (in the Okuno Building in Ginza), entitled "Tatsu-Hikari / たつ光".  In the small under-the-stairs space is a kind of... of... I don't know if sculpture is the right word, but something similar to that with physical shapes, light & shadows, which was my favorite part of the exhibit.  Moving over to the basement regular exhibition room, there are very large photographs that got me to thinking "Hey!  You can print out photos this huge?  I want to do that too!"  The promotional postcard for the event is as follows: 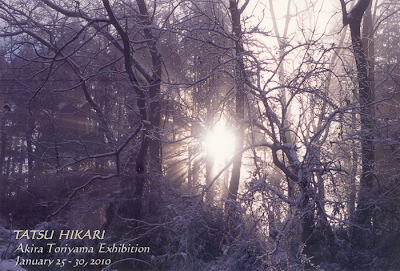 The above image being on a postcard, it's hard to image the effect of the huge prints (covering most of each wall they are on), but the effect is pretty much like being at the scene the pictures were taken.

Most effective were the scenes of things at a distance, which seemed quite real from any viewing distance.  Photos of closer things needed to be seen from a distance to look right however.  As an example, there was a scene of motion-blurred moving water in the basement space that was disturbing to look at up close, but began to look natural when seen from the extreme opposite side of the room.  Probably the disturbing feeling when seeing it up close would be different with everything in focus, but with the blur, distance is needed for it to look right.

I hope I'm not sounding overly critical though, because the huge photos were actually quite nice to look at and some had emotion-generating levels of beautiful color in them.

Kawamoto Yoko's ceramic exhibition was interesting, and the colors were much better than they appear in the photo on the promotional postcard (which seems to have been - unfortunately - taken with a flash that has washed out much of the color): 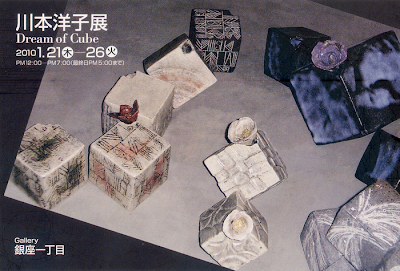 I particularly liked the design shown in the lower right corner of the above picture.  It looked much more... I was going to say "impressive", but actually what I want to say is more along the lines of "real"?  As in there are any number of designs in and on insubstantial materials, but there was a *feeling* to the cubes with that design that radiated... um... realness?  Hmmm... there must be a better way to describe it, but this will have to do for now!

There was an exhibition of Nagae Naoya's art at Gallery 403 from January 17th to the 27th. The promotional postcard for the exhibition is as follows (I've followed the usual local custom of putting the family name first, and the post card has switched it around): 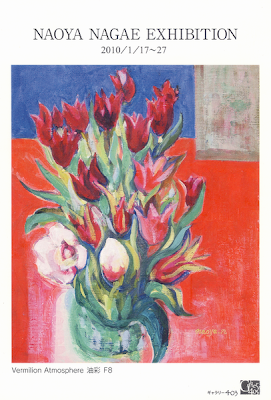 What I found interesting at the exhibit were the preproduction drawings, which showed the artist's progression from the original sketch to the final version.  In some cases there were fairly radical changes in color, etc., prompting your imagination to wonder at the different directions a creation can take....

I met the artist who created this picture (below - from the promotional postcard for the artist's exhibition in the Okuno Building) and we talked a little about "Nihonga" pictures like this one. The word can be translated as "Japanese painting", but the way I've been hearing it used when using it with artists is to identify the material - which is based on natural elements, like crushed rocks, shells, etc. The effect is nice in that you don't get any slick reflections, so the surface looks more... real... than oil or acrylic paints. (Of course you can't exactly see that effect in a reproduction printed with standard inks, but still...) 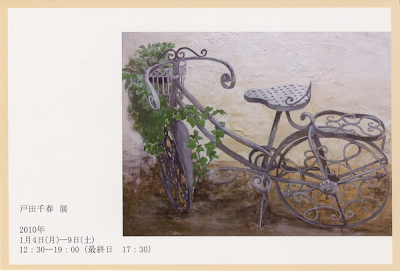 戸田千春
And that's basically it. Now that I've started this blog, I'll try to get direct comments from artists that I can quote (with their permission).

Another artist I met this week who produces art in an unconventional way is Watanabe Kousai (渡辺光彩). An example can be seen in this promotional postcard I received from her: 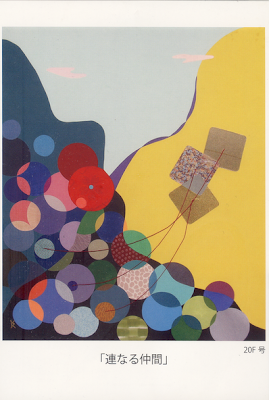 This art is produced by overlaying bits of cloth. From a distance you imagine the picture was made with paint, and then feel surprised (when told or upon close inspection) to discover that it is all done with cloth.

At the site above is the following explanation of the technique and its history (in Japanese):

I recently met Miyakawa Kazumi, an artist who creates amazing pictures with wood. It's impossible to describe other than to show you an example, so here's one (from a promotional postcard I received from the artist): 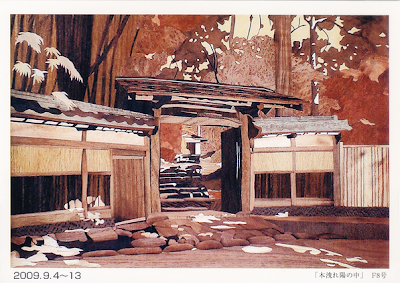 The different colors and whatnot are created by cutting out pieces of wood and inlaying them one by one. From a distance, you would never imagine how the pictures are made - you have to get very close to see all the intricately placed wood, and then you step back and take another look, thinking "Wow...! Amazing!!"

The artist has a blog here: http://blogs.yahoo.co.jp/kazu4145

One more example (also from a promotional postcard that the artist game me): 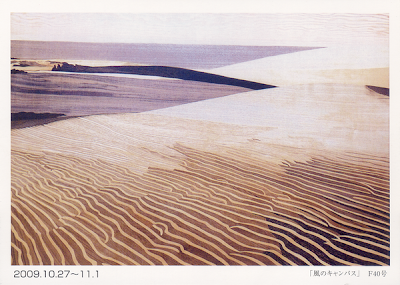 Bouncing around on Saturday, January 16th, 2010, I ran into Nagashima Koichiro (written as "Kouichirou Nagashima" on his CDs) playing his guitar and singing out in a cold-cold January wind on the east side of Shinjuku Station.

Here's a video clip I took of part of his performance:

I liked his music, so I bought the three CD's he had out for sale (one with two songs and the other two with one song each). Of the three, I like the song on the #3 CD best I think. The recordings are very clear by the way.